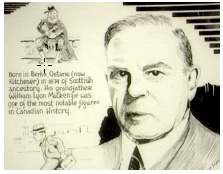 He lead a Liberal government from 1921 until June 1926 (when the Customs Scandal and the King-Byng affair temporarily sidetracked him); from September 1926 until 1930 (when the depression began to settle in); and then from 1935 to 1948.

King was the grandson, on his mother's side, of the 1837 rebel, William Lyon Mackenzie. He had great respect for his grandfather and a devotion to his mother that went beyond the grave. After her death, he often spoke to her through seance: a meeting where people try to communicate with the spirits of the dead by the help of a person called the medium.seances and knelt before her picture in his study when he wanted her guidance. 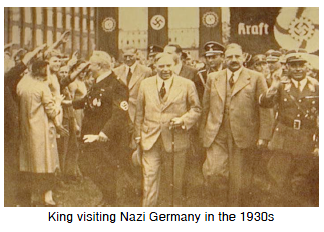 King wrote a small and not very readable book in 1918 called Industry and Humanity which outlined his philosophical belief that governments should take the inhumanity out of capitalism: an economic system based on private ownership of land, factories and other means of production. The goods and services produced compete on a free market for whatever profit is possible.capitalism by providing some social assistance and working standards. During World War II King introduced the Family Allowance and unemployment insurance. He also put the central bank (started by R.B. Bennett) under government, instead of private, control. 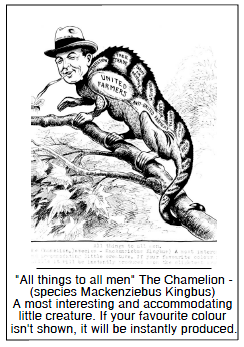 King was known as well for his ability to understand Quebec and maintain the delicate balance required for Canadian unity. He was especially concerned during WWII that another divisive
conscription: the compulsory enlistment of men into the armed services by an act of law.conscription crisis not tear the country apart. He had sided with Sir Wilfrid Laurier against Prime Minister Robert Borden during the first conscription crisis of 1917 and had secured Quebec's loyalty to the Liberal party as a result. King never married. Governing the country was his whole life. Although he was not terribly elegant in appearance or eloquent in speech, Canadians trusted him and re-elected him time after time. He was the longest serving prime minister in our history - governing 7,800 days altogether.

<< Prev: The Great Depression
Next: Stock Exchange in the 1930s >>
Further Reference