The aboriginal people of the northwest coast benefited from a benevolent environment which allowed them the leisure time to create the wonderful totem poles and other works of art for which they are so well known.

Much of their land was rainforest and their key resources - salmon and cedar - were plentiful. These groups include the Haida, Tsimshian, Kwakiutl, Nuxalk, Coast Salish and the Nuu-chah-nulth (formerly called the Nootka - a misnomer originally used by Captain James Cook). The Nuu-chah-nulth and Kwakiutl are branches of the Wakashan language family.

The sea offered abundant food. The most important was salmon. There were five different species of salmon all with different spawning spawn: to produce eggs, give birth to. times. As the salmon teemed up the rivers to spawn back where they were born, they were easily harvested with harpoons, nets or traps. Then they were dried or smoked for winter. The sea also offered seals, shellfish, crabs and other fish like lingcod, halibut and herring. The eulachon - an oily smelt - provided valuable eulachon oil. There was also intertidal food which could be gathered by the women. They combed the beach between tides using sticks and baskets to gather the food.

The people of the northwest coast lived in large multi-family homes made from cedar posts and beams covered in planking. Often the centre door posts and some interior posts were carved like the free-standing totem poles which decorated many villages. A lot of groups maintained both summer and winter villages, the winter location being more sheltered from coastal storms.

The Pacific coast peoples had ocean-going dugout canoes. Some could hold two people; others were big enough for a crew of 50. These larger sea canoes were up to 20 metres long and over two metres wide, dug out of the huge cedars that grew in the Queen Charlotte Islands. In these sturdy boats they could travel great distances down the coast for social occasions, fishing expeditions or warfare. The Haida were known to have travelled 480 kilometres from the Queen Charlottes to Victoria. The Nuu-chah-nulth were the only group to venture out to sea to hunt the great whales and a whole ritual accompanied the whale hunt.

Unlike most indigenous peoples, the West Coast nations recognized "ownership" by family groups of certain territories for fishing, housing sites, etc. They also had an inherited class system of nobles, commoners and slaves. In the southern, Wakashan tribes, inheritance could be either through the mother's or the father's line. 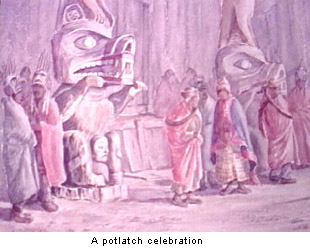 The most important social event was the potlatch potlatch: a gift-giving ceremony and festival practised by the indigenous peoples of the northwest coast of North America.. At these gatherings the host would show his wealth by giving lavish gifts to the visiting guests (this was also a means of redistributing the wealth) and there was much storytelling. Like other indigenous peoples, those on the Pacific coast believed they were surrounded by supernatural beings. One of their most popular characters was the Raven who could transform himself and was a great trickster.