The buffalo is the largest living animal native to the western hemisphere. Adult males can weigh up to 1000 kilos. At one time, before the Europeans arrived, it is estimated that 60 million of the animals lived in North America. 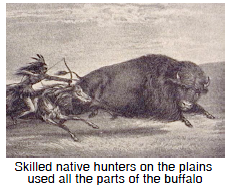 The buffalo was the main source of food and clothing for the Indigenous people of the plains. The buffalo hunt was a major community effort and every part of the slaughtered animal was used. The meat was cut in strips, smoked and dried into a hard food called jerky. When the jerky was ground into a fine powder and mixed with berries and fat it became pemmican.

Buffalo bone was used for knives and ornaments, the hide made clothing and tipis, the sinew: a tough, strong band or cord that joins muscle to bone; tendonsinew provided thread and strings for their bows, the stomach and other internal organs were used for containers, and the hooves were used for glue or made into rattles.

Towards the end of the 19th century the buffalo had been wiped out in Canada. The coming of white settlers and the railway caused a lot of buffalo to be slaughtered because they were in the way. And when Indigenous people started to use rifles for the buffalo hunt, the animals were killed off in great numbers. 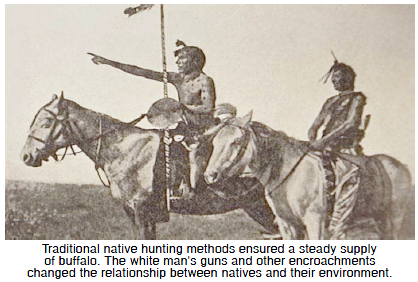 A few of the almost extinct animals were kept on a First Nations reservation in Montana until 1906 when the Canadian government agreed to buy them and they were herded to Wood Buffalo National Park in northern Alberta where half of the few remaining buffalo in the world roam free today.